Two races of creatures appearing in Narus' Quest.
You can find some pictures and additional info at: http://colourfire.nfshost.com/FoTM/Silirw/ You can ask any questions in IRC, in the channel #silirwstuff.

The term refers to both Cyrals and Enials together.
There are 8 main regions of Uis (essentially continents): Epicentral, Upleft, Left, Opposite, Upright, Downright, Farleft, and Farright. Each region has its associated traits (Enials with Opposite region lineage, for example, have ridgeflaps that protrude sideways). There are areas in some regions for people who are mentally unfit in specific ways to live in, and anyone born there gets a special prefix added to their last name (but these are not their own regions and have no associated physical traits).
Flavour: while they aren't totally disagreeable to a human palate (though peoples' tastes differ)...they may or may not be toxic for humans to consume.

Having had millenia and help from civilisations with more advanced technology than Uis', they create their food to be easy for their bodies to process, with a minumum of waste. Their digestive systems are quite robust, and can use a fair variety of substances for energy, respirationlike processes, and building tissue. Naturally, there are some things that work better for Enials than Cyrals and vice-versa, but they can generally eat all of the same things. Also, due to the structure of their mouths, some things that are able to be digested are not convenient to eat. For example: Enials invented soup, which they can consume easily, but Cyrals don't really have lips and it is more difficult for them. 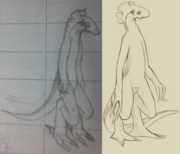 Left: a male by Toastline. Right: a female by Captain Slowpoke. (Both are Epicentral) 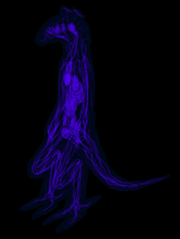 The veinous structure of a male is something like this.

Exclusive to the quest.

A Plush Cyral appeared in one panel of Tear. 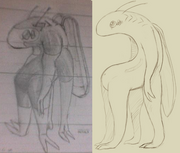 Left: an hermaphrodite by Toastline. Right: a female by Captain Slowpoke.(Both are Epicentral)

The eye-markings of the different sexes.

A Cyrenial appeared as one of the hybrids in Venji Quest.