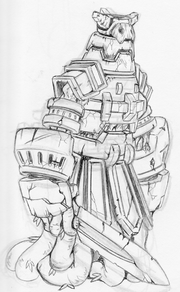 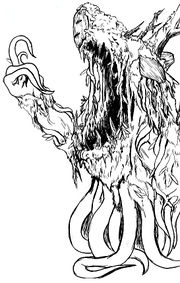 A Hat'kal without its armor

The Hat’kal are large aggregate plant creatures. Their appearance is that of a large mass of vines, sticks, moss, and other plants with a wooden mask representing a head. Little is truly known about the Hat’kal’s bodies, other than destroying the bulk of one’s body does little to stop it, merely slowing it down as it is forced to reconstruct a new body from plants. It is believed that behind the mask is some form of root core that is the actual creature itself, which somehow managed to manipulate and control other plant life. Each Hat’kal grows a hard, wooden mask as they develop. They start as small clusters of plants and as they “age” collect more and more mass growing into the towering creatures feared by most of Layridin’s inhabitants. The wooden masks are essentially their faces, each one unique to the individual Hat’kal and capable of warping to express limited emotion. Hat’kal are carnivores, subsisting on the meat of other creatures eaten by engulfing their prey within their body and digesting them, sometimes alive. Their maw can appear nearly anywhere on their body and can expand to take up nearly the entirety of their facing. Though it may not look it, Hat’kal do, in fact, have eyes. The inky black pits of their masks are fully functional eyes allowing the Hat’kal to see with equivalent vision to that of a Ploverlor. Hat'kal are genderless, or more appropriately, hermaphroditic, possess both male and female plant parts reproducing much in the same way as many average plants.

Hat’kal, being essentially masses of writhing vines, know that they are particularly vulnerable to slashing or chopping weapons. To counter this they began equipping themselves with armor made from stone, frequently pieces carved from ruins. This stone armor protects large portions of their bodies from many of these weapon types, as well as allows them to camouflage themselves while seeking refuge or laying ambushes within the many ruins that litter the world. Some of their weapons are constructed from stone as well, large heavy blades or mauls using their heft to crush their foes.

Many Hat’kal are incapable of speech, resorting to a complicated series of “hand” signals performed with their vine like appendages to communicate. Most other species require some sort of translator to understand these signals as it tends to be a difficult language to learn. A few of the Hat’kal masses possess an ability to communicate through a relatively low frequency “voice” that sounds and feels like some form of vibration.

One empire within the Hat’kal, the Empire of Ashom-ashe, is known for its aggressive expansionism. Under the guidance of Emperor Ghawor Tairan and his army generals they have spread their rein over a large portion of the mainland. Many cities have fallen under Hat’kal rule as a result of this, some of the people who have found themselves serving under the Hat’kal’s rule are a large population of Ploverlor and Jungle Lazuhrek, and smaller numbers of River Lazuhrek. Elements of the conquered people’s culture that the empire likes are adopted, those elements they do not find appealing are eliminated. The conquered people are treated as second class citizens. They are taxed by the empire and are required to accept conscription at the behest of the Emperor with no questions asked. Any citizens taken as slaves are given a minimal wage and provided living quarters for themselves and their families by their masters and required to perform a variety of labors. The Ploverlor are treated with higher regard than the Jungle Lazuhrek as the Hat’kal find their blindness needlessly difficult in regards to communication. The Hat’kal’s progression into certain other territories is currently stalled. Their requirements of water to maintain their plant bodies prevents them from marching the long distances into the deserts to locate the nomadic Engsami camps, and their vulnerability to extreme drops in temperature currently prevents them from progressing up the mountains to where the Mountain Lazuhrek dwell. The Lohrke’s technomancy makes routing them out of their caves an expenditure of resources currently not deemed as prudent, though Lohrke slaves have been purchased from Engsami slave traders and put to work developing weapons for the war effort. The Hat’kal Empire is currently in an arms race with the Tomias to build up their forces and supplement them with magic and technology in order to bring the other down. The Tomias have grown and spread their faith far enough to pose a threat to the emperor’s goals and are thus viewed with the respect and disdain appropriate to a worthy adversary.