A race of rat-like appearing in many settings, first appeared in Alien Quest. Most notable ratmen are [Skaven] from Warhammer Fantasy universe and Wererats from Advanced Dungeons and Dragons or Old World of Darkness. 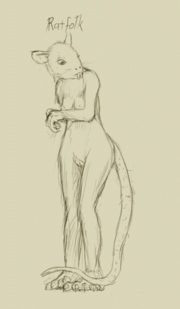 It's pretty established that Ratmen have a lot of animalistic features. Their heads are those of rats, bodies are covered in thick fur in variety of colours akin to rats - browns, black, grey and white. They also have long whip-like tails, that seem to be prehensile in most cases. Their hands resemble scrawny human ones with thin bone-like fingers, often having claws on the end. Their hands, wrists and feet are furless, some of the authors also make their behinds furless, copying the Skaven looks.

The only diversity through the settings is their way or walking. It differs from ratmen having digitgrade feet (although this seems to be very rare) to them walking on full plantigrade ones (most common). They often appear to be hunched, but it's kind of hard to tell is it because of the specific design or because they keep their head low all of the time.

Ikit - A very short, and very loud shopkeeper who is very HONEST, and needs to feed his starving children. He is hiding something in his basement. He also was modeled after Ikit - Ratman trader from a Kobold-themed campaign that the author participated it.

Of Rat And Men

Nezu - An adorable orphaned rat-girl with freckles, that Tura took under her care. Used to be a sneaky thief, trying to live off what she stole. She totally hates bathing and working for old Kobold professors. Currently she's hanging around with Tura, causing mischief and mayhem.

Iesgip - A.K.A. Python, a hunter-gatherer, providing food and herbs for Ridder's merry men (and women). She is known for engaging in some tactical espionage action. Also has an amazing set of abs. It's disputed whether she is a kobold or of ratfolk.