Blockheads are reddish pink and have rectangular heads. They are the smallest of the species in Bite Quest by far, standing around 3' in height.

Created by BiteQuest (the author). 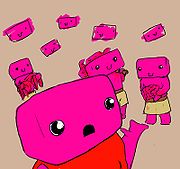 Blockheads were created by Arcus Soulfire to build his cities and populate his realm. Unfortunately Soulfire's skills at transmutation are fairly poor, and he isn't very imaginative, so they are extremely simple, in more ways than one. Their skin is bright reddish-pink color, with their blood being a bubblegum-pink. They have small black eyes and a perpetual dumb smile on their faces. There are no readily apparent differences between the sexes, but females wear a skirt and males wear short pants so they can tell each other apart at a glance. Most of the time. All blockheads are named Eustace or Gertrude, usually depending on their sex. It is completely unknown where this originated. Blockheads are tireless and feel no pain. When a Blockhead is given an order, he will continue fulfilling that order until he dies, is given another order, or gets confused. They have a natural tendency to stack things into buildings, which can cause a problem if they are in another area undirected. They tend to make enormous unstable rectangular 'houses' wherever they go.

The vast population of Blockheads could be considered functionally retarded, and must be guided in their labors by Adepts. They behave much like Dorfs in that they will constantly throw themselves into a deadly situation because there is something shiny or a sock near it, or sometimes, just to see what is happening. They have absolutely no self preservation instincts, and their skulls make handy building blocks for other blockheads. Blockhead Adepts must give up their Foolishness for the power to heal and direct their charges, but this also has the unfortunate side effect of making them intelligent enough to understand how stupid blockheads are. Occasionally they will become overpopulated, and Soulfire will send an adept forth into the world with a large group of Blockheads for the purposes of colonizing some other place. Most of the blockheads end up dying this way, but the Adept will do his best to keep the community together until finding a suitable place to settle.