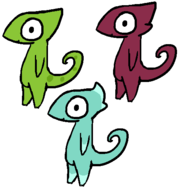 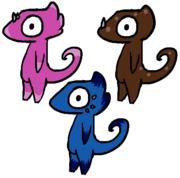 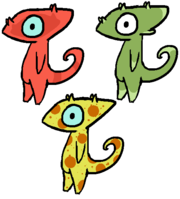 Chameleons are a small and peaceful race, reptilian in nature. They are primarily arboreal, carving homes out of the giant trees that make up their forests. They possess a long prehensile tail to aid in gripping, as well as backward facing toes on their feet. Hailed for their artistic culture, Chameleons have a strong grasp of the workings of light and hues. Chameleons in general are peaceful and complacent, adapting quickly to subservient roles among themselves. Some are more dominant and self-assure than others, they tend to be in positions of power.

Females are considered more desirable based on tail length and the color/variety of their scales. Males will usually have shorter, loosely curled tails. Bright and vibrant color is found in both genders, with dull or unhealthy scaled adults being shunned from the mating population. Females produce one egg per coupling, with twin eggs a rarity (considered lucky). Chameleons are cold-blooded creatures. The forests they inhabit go through a short winter period lasting about 2 months. Mating ceases 2 months before hand to avoid 'cold births'. The odd egg laid in the winter period will more then likely not hatch. Clothing is rare among their villages, but they love the opportunity to wear bright gaudy fabric when going out among other species. Chameleons mate for life, with the female usually initiating the bond. Though rare, Chief chameleons have been known to take various lovers to perpetuate their patterns and shimmering scales to the next generation. Entire clans can live in a single tree, with the eldest members closer to the top and able to receive more sun. Generally a female will bring her new mate into her family tree.

Among their species, there are three primary 'sub-species' who's classification is based on appearance.

Northern Forest chameleons tend to have the most tame and unvaried scales. Pattens appear from time to time, but are never as extravagant compared to the Eastern and Southern patterns. the snout comes to a point more often than not, with the crest being a simple sloping sheet. Some have small protuberances and flairs along the crest.

Eastern Forest chameleons have small spines growing along their crests, cheeks, and snout more often that not. The snouts themselves are rounded and snubbed more noticeably than other variations. Easterns are more patterned that Northerns, with only one of every ten hatchlings being a single shade. Crests turn upwards in general, with flairs being commonplace.

Southern Forest chameleons are a matter of debate among chameleons as a whole. Every Southern chameleon is patterned to some extent, in most cases extremely so. They consider having tinted eyes a sign of being closer to their Goddess, Oa-il. Unfortunately tinted eyes come at the cost of blindness, but are still heavily sought after in families. Northern and Eastern chameleons claim that Southerns are driving AWAY from the Goddess, as they are throwing away the gift of sight and becoming unable to appreciate the grand colors and hues she has bestowed on their planet. Crests are elongated and pointy, with minimal flares. Fleshy pseudo-spines can be seen on a large part of the population.

Chameleons are loud and boisterous in their language. There are no hidden words or double meanings in their speech, given their blunt, heart-on-their-sleeve nature. While unobservable to other species, among themselves chameleons can 'see' the hue and tone of each others speech. The words themselves are soft spoken and devoid of sharp or harsh tones.

There is no gender basis for their Chief. The brightest and most patterned Chameleon (Who is usually more cunning than the others) Will live in the top of the largest tree. There are rings of 'Lesser' Chameleons who are not as vibrant, but still posses traits such as a domineering personality or a sharp mind, who take orders from the Chief and relay issues back up to them. They do not like to leave their forests, but many take up as wandering merchants, selling dyes and inks of unrivaled quality. They have an obsession with gems. Even the proudest Chameleon will promise themselves into a working contract for several years for a well cut stone with good coloring. The more gems a family possesses, the higher they rank as a whole among the others.