Glukmil is a kobold and also the quest about the kobold. This quest is about infiltrating a dwarven fortress to find his missing friend, and also to grab some stuff from the dwarves before he leaves.

This quest uses a dice system to determine success and failure. Rolling a d20 under the stat most sensibly used for whatever action Glukmil is undertaking is a success, whereas rolling over it is a failure. Also there are sometimes hidden modifiers around based on the difficulty of the task. 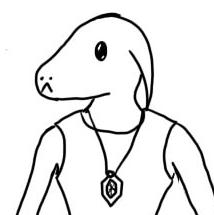 The titular kobold of this quest. He's got an average build and is not all that bright or convincing. He's a normal kobold in most ways. He began his adventure with nothing but the shirt on his back and a small obsidian knife. He wants to find his lost friend and get away :<

Glukmil has made one appearance Inside the Quest. [1]