Also known as Rape-Jehral-and-Touch-his-Nose Quest, a quest by Gnoll about a DFC reverse-trap dragonbold questing for a coherent plot.

Also Nako is in it, though the time frame is still ambiguous. 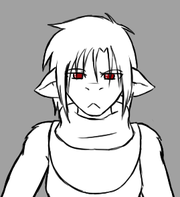 A half-dragon, half-kobold mercenary who finds herself tangled up in a plot to resurrect an ancient god. Exact age unknown due to her chaotic youth, though she is likely mid to late twenties. She was raised in a farming town until her thirst for adventure got the better of her and she ran off to join a mercenary company. Likes bacon (though less than originally thought). Also wants to quit dicking around and go on a FUCKING MAGICAL ADVENTURE. 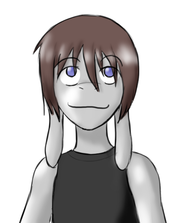 A half-elf half-kobold scout. Accompanies Rynh on her journey. Prone to being raped. Surprisingly little is known about him, considering his apparent role as main supporting character. 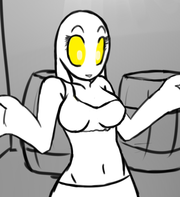 A large breasted goblin with some experience with explosives. As is typical for her race, she has no issues with murder, rape, theft, arson, assault or rape. This makes her effective during sieges, town raids and also popular back at base~ 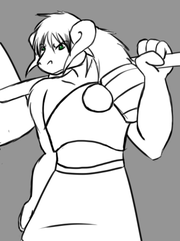 A minotaur barbarian with considerable physical strength. Outside of battle he is reasonably good natured and usually quite loud. He is disappointed by the lack people willing to enter into headbutting contests with him. You cannot ignore his girth.

Chapter Two: Between the Rock and a Hardplace

Rynh kills an annoying rat guy with her bear(dragon) hands. Then she buys some knives and armor and takes a caravan to a goblin town, dragging Jehral along with her. Then she goes shopping again, buying some new clothes and a book on magic. She starts studying on a rock outside the town as a shadowy figure approaches.

Rynh beats up a shadowy figure that ambushes her, Jehral learns that Rynh is a girl, Doobanicus shows up, gets owned, Rynh gets drunk off her ass, wakes up with a hangover, cuddles Jehral, gets puked on, gets topless and plays with Jehral, has an amusing conversation with some dwarves, gets a hard-on for Jehral, makes a number of inappropriate comments, flirts with Jehral some more, and gets on a boat.

Rynh gets some training on in an elf city, as well as a new change of clothes, while Jehral gets swarmed by elf girls. Rynh does some crazy magic shit and makes ice bridges, sexually assaults Jehral again, shows some kobolds that she's a motherfucking dragon, meets her mom, learns about an ancient god and learns how to polymorph.

Rynh meets her probably-half-brother, visits her mom again, learns to fly, or at least crash, electrocutes a rabbit, sits on Jehral, beats up Thodren, decides to be a balanced magical fighter, chooses a mercenary job, and then chooses some mercenaries to go with it.

Rynh fights a manticore with Thodren, Jehral, and Gustav, sees more of Thodren than she wants to, talks about magic with Gustav, talks about boys and explosions with Nako, makes plans to destroy a war golem, fights with Jehral, teases Jehral, hugs Jehral, and goes off by herself to blow things up.

Rynh considers how to spend her newfound wealth, finds out there are way too many kinds of sword, gets her hair done, puts Jehral in a dress, buys Jehral a drink, fights with Thodren to avenge her breakfast, chooses another mercenary job, and chooses some more mercenaries to go with it.

Rynh and her group meet the archaeologist, fight some gnolls, blow up a historic site, do not get shot with lasers, get zapped with magic locks, hide behind each other, fight kobolds in a scary costume, set a ghoul on fire, look for shiny things, unleash an unspeakable evil, do some archaeology, and go home. 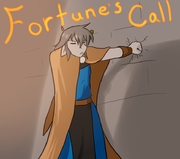 Appearances by the cast Inside the Quest, sorted by the threads they ran concurrent to.