Panzermensch is a facility exploring quest about a young girl that wakes up with partial amnesia, in a strange facility with a sinister AI. Alice, the protagonist, runs from crazed butchers and violent prisoners, loves her friend Jason dearly, and hopes only to escape with him and return to her life.

Alice is a young woman, and the protagonist of the quest. After awakening in a mysterious facility and faced with the emotionless AI "momdad", she has been searching for a way out, and for answers about her own life. Alice has a somewhat virginal personality, blushing at small displays of affection, yet seems to enjoy teasing Jason as often as she's able. She's physically capable but not terribly strong. Alice also is an emotional person and is somewhat prone to sobbing uncontrollably when the situation gets dire.

Jason was found in a room directly above Alice's, sulking about the AI locking him in there. He has a prominent scar on his bald head. Despite some initial distrust, Alice and Jason became fast friends, and now have even professed love for one another. Jason is a manly man, capable of moving heavy objects and an adroit combatant. He is very protective of Alice, even to the point of nearly martyring himself.

Bane is an excessively chipper and pleasant guy with a bit of an accent, found in a prison cell. After momdad released the prisoners, Bane helped save Jason from the crazy, unnamed prisoner. He's been an effective teammate for Jason, and is certainly polite and nice to have around. He's also assisted with the Pete problem. Bane seems to be immune to pain. He is also suspicious for being so pleasant. He also has the habit of calling people his duckies

Cid is an emaciated but still capable fellow that Alice met in a dark room. Cid had been locked there by momdad, on Preacher's orders, and is seemingly near death from starvation. He's very adept with computers and associated technology, and has been useful in that regard, opening doors and activating cameras for Alice.

"Momdad", "mom", "dad", "AI", and whatever else you call it, is an AI construct that seems to hold sway over a good portion of the facility. She is commonly referred to as a female. Momdad seems parental towards Alice and Jason, and says she wants the best for them, but constantly confounds their escape attempts and doesn't actually seem to be helpful. Momdad is also commonly distracted with other issues and not available for her children. She also has a tendency to be somewhat robotic when she doesn't understand the current interaction.

Pete is was a psychotic murderer with a butcher theme, stalking around the facility talking about food, while hacking people apart and storing them in his 'kitchen'. He attacked Alice a number of times, though the limbs and whatnot he left around everywhere occasionally proved useful. Pete is currently dead... as far as we know.

The Unknown Prisoner was found in a cell similar to Bane's, but he's a lot less chipper and pleasant. He demanded to be released, and when Alice hesitated, he became enraged and violent. After momdad released the prisoners, he assaulted Jason, but was fought off with the help of Bane.

David is someone else in the facility, possibly a system administrator. He's fairly mysterious. He wears a suit and a cross around his neck, and has a metal device where his lower jaw should be. His voice is without bass and sounds like an old or bad recording.

Dr. ---- has been mentioned by Alice a time or two, though she can't seem to remember his name. He was apparently contracted to do medical work on Alice, including implanting something or another. Information is a bit sketchy. He has appeared on a few notes aswell, though those did not provide a name either...Or perhaps his name IS '----'? 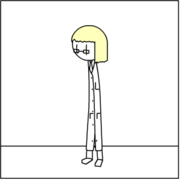 Dr. G. has been banned from searching for 'touhou futa'. You know what you did, Dr. G.

Dr. G so far has been a joke, but it's uncertain if Velenor plans to make it a real character or not.