Difference between revisions of "Tozol" 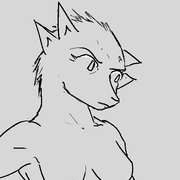 A species appearing in Tozol Quest, Battle Quest, and Venji Quest (kind of). Created by TestPattern.

Tozols are genetically engineered soldier-aliens. On average, they stand five and a half feet tall, though individuals maybe up to two inches taller or shorter. They less volume on average than a human, but more mass due to their high density. They have digitigrade legs ending in oppose-able three-toed feet and ten whip-like tails that sense movement and vibrations in air. Their heads are rich in sensory organs, with large eyes with vertical oval pupils, a snout allowing for a keen sense of smell, and four ears. They are coated in short gray fur. They also possess a number of retractable hook- or claw-like structures that aid in securing and carrying equipment.

Described in-universe as "self-replicating combat drones," Tozols are bioengineered super-soldiers created by an elusive and as-yet unseen race known only as the "Precursors". They have a strict, militaristic society that generally revolves around battle (though not to the extent of the jokes frequently made about their everyday lives), and as a whole they possess incredible martial prowess and superhuman ability in almost every sense of the word (see "observed abilities" section). Their current abilities are not known, as the only Tozol seen moving at this time is severely injured. Tozol genes are not carried in DNA, and their genes are not carried in every cell in their entire body like non-engineered creatures. They are immune to pure magical attacks.

Infant tozols are 'programmed' or 'taught' via direct and physical connection of nervous system to their mother as they develop, and thus understand the tozol languages, basic facts, and hereditary orders at birth. This is also why names are matrilineal (c.f. Baj Oriat, son of Reya Oriat). Under perfect circumstances with sufficient quantities of the necessary materials, it can take as little as three months for them to be considered fully developed.[ref] These infants are born as largely-immobile larvae-like forms, with fully developed sensory capabilities - limbs and full body development occurs as they age - as they are intended to watch and learn whilst they are still young.

Tozols rarely make use of cybernetic enhancements, primarily because of their 'healing factor' and the extensive anti-tampering measures designed into them by the Precusors. Compatible implants must be able to pass extremely stringent requirements in order to 'interface' correctly and avoid rejection, and thus tend to be highly specialized.

The tozol healing rate is notably fast and efficient enough that tozols generally do not bother to study medicine - it is simply not worth the trouble of trying to improve the rate at which they heal already. So long as they have a relatively safe place, do not exert themselves too much, and have access to sufficient quantities of necessary materials, they can recover from almost any injury. It should still be noted, however, that repairs are 'build first, tune later'. Their design puts emphasis on getting systems up and running first, and then actually making them work as efficiently as possible when there's time; rapid repairs upon rapid repairs is essentially much like jury-rigging normal hardware into holding together with duct tape and wire. Fully and properly regenerating components, especially lost limbs, can still take several weeks.

Penji, the only active tozol seen to date,[TODO: circa, what, mid 2011?] has been observed with the following abilities. She is not at full capacity, and she will regain more abilities as she heals.