The Lazurek mostly worship Nalos, the goddess of fire and nature. Usually depicted as a lithe figure whose lower portion is melded with a tree, arms out stretched, mimicking the branches of the tree she is bound to, a mournful look on her face. It is said that as punishment for a great crime involving setting the world ablaze, she was bound to an immobile object, and her flesh turned to a flammable substance. The world would then be populated with similar flora, and their pain would be her pain, their life would be her life, and should they prosper, she would prosper. The Lazurek worship this deity because it is her sacrifice that gives them their homes, their greatest weapons, and shelters them from most of their enemies. The Mountain Lazurek version of the story involves much more fighting and harsh language. It also describes the “mournful look” on the deity’s face as more of a rage filled face. 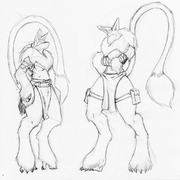 A female and male Jungle Lazurek

Jungle Lazurek, as their name implies, primarily dwell in thick jungles and are primarily nocturnal. Using their hand-like feet, whip-like tails, and superb agility, they fling themselves through the tree tops as their primary source of conveyance. They possess strong and muscular legs to making bounding strides when forced to maneuver across open ground or even just the jungle floor. Like the other types of Lazurek that have developed across the world, the Jungle variant has no eyes, they retain brows, implying that at one time they possessed eyes but over the course of time lost them developing other means of “sight” suited for their nocturnal habits. They “see” through a sort of echolocation. They produce a high frequency sound in the pit of their throats, barely audible by most other species, and utilize it as a manner of sonar. This act is commonly subconscious for any Lazurek beyond the infant stage, and has been observed to cause the manes around their necks to flutter and vibrate as a sort of visual cue to them looking around. They possess a very keen sense of hearing, smell, and touch, and “look” with their ears, which can rotate 180 degrees on either side of their head. You can generally tell which way one is looking by which direction their ears are facing. Their feet are almost identical to their hands and allow them to grip objects, hold weapons, cling to surfaces they can dig their claws into or grab around. Their tails a long and nearly prehensile, they lack the control over them as a truly prehensile appendage would have. Their tail ends in a large lump of cartilage plates and muscle. When relaxed this lump bends and flows like the rest of the tail, appearing as just a large poof of fluff, but when the muscles tense, it becomes a hard cudgel like natural weapon. Like all Lazurek, the jungle variety are omnivorous and possess an array of teeth that can deliver a nasty bite, but lack the jaw strength to be particularly life threatening unless delivered in a vital location.

Jungle Lazurek build their homes in the tops of trees, commonly with a large open balcony with a fabric roof suspended over it. A separate series of “buildings” are commonly included in the bases of trees for larger settlements to accommodate outsiders and harbor trade. With their natural climbing ability, the residential dwellings are difficult for most other species to get to, lacking conventional means of reaching them. Their primary trade is fruit, medicine made from jungle plants, and wild tree faring animals.

The Jungle Lazurek are wary of and do not like the Ploverlor, as they are frequently emissaries of the Hat’kal who have conquered much of the Jungle Lazurek lands. The echolocation of the Lazurek make them ill suited to battle the Hat’kal who are almost completely silent and nearly impossible for them to distinguish from any other plant in the jungle due to their bodies being made up entirely of living plant matter. The Hat’kal tend to employ Jungle Lazurek as assassins, spies, and thieves, seeing them as of little use otherwise.

A male and female River Lazurek

River Lazurek, as their name implies, dwell primarily around rivers and lakes, frequently building their villages directly on their shores or even partially below the surface of the water. They are shorter and a bit stockier than their Jungle counterparts, covered in short, thick fur and possessing a much shorter mane. Their hands and feet are webbed, and their tail is wide and muscular. They are just as nimble and quick in the water as the Jungle Lazurek are in the trees and have the same sort of hand-like feet as their jungle cousins as well. They are capable of staying submerged for nearly a full half hour before resurfacing. Like all Lazurek, the River variant have no eyes, they retain brows, suggesting that at one time they possessed eyes but gradually developed a lack of need for them and evolved alternative means of “sight” to suit their primarily nocturnal life styles. They possess a very keen sense of smell, hearing, and touch, relying on a similar form of echo-location to that of their jungle cousins. Their ears are smaller than their jungle counterparts, and their tails are shorter and thicker but are strong and act as their primary source of propulsion through the water. They primarily dine on fish and lake/ river plants.

River Lazurek build their homes on the shores of or in fresh water rivers and lakes. They build their structures primarily out of wood and some can extend for many floors beneath the surface of the water. Some submersed buildings are built to be air tight with no under water access hatches. These tend to be storage facilities or holding areas they either place prisoners, guests, or retreat non combatants to when their villages are threatened. They maintain very good relations with the Kren, frequently getting first pick from the stocks of their traveling merchants, being common first stops on their trips due to their proximity to bodies of water. Due to the vast, spread out nature of their cities, they have not come under the dominion of the Hat’kal in any significant number like their Jungle dwelling cousins. Their primary trade is fish and edible river/ lake plants. 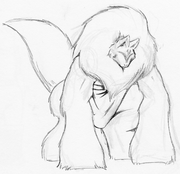 Mountain Lazurek, as their name implies, primarily dwell in mountainous regions. Appearance wise, they are the most different from the other two breeds of Lazurek. They have very large powerful builds. Due to the bulk of their upper bodies, they commonly walk around on all fours. They have the same hand-like feet as their cousins, and a wide, sinuous, powerful prehensile tail capable of firmly grabbing and crushing objects. They are very strong, and slow moving, especially when compared to the other Lazurek. Their bodies are covered in a thick layer of fur, normally primarily shades of white, followed by a thick layer of skin and fat to maintain their own body heat. Like all Lazurek, the mountain dwelling ones have no eyes, instead possessing a sort of pit organ, allowing them to detect changes in heat in their surroundings, supplementing their heightened senses of hearing, smell, and touch. Their bulk allows them to power through harsh terrain and navigate rocky outcroppings common in their homes.

Mountain Lazurek tend to develop their homes either in caves, around caves utilizing structures made out of wood and trees, or just in thick areas of forest. Their intimidating size and Viking-like society prevents many would be invaders from bothering them. The Hat’kal have not even attempted to attack the Mountain Lazurek due to the climate in their location being very inhospitable for their plant bodies. The Tomias have tried many times to convert cities of Mountain Lazurek, but have failed and been run out of their towns every time. Their primary trade is fur, ale, meat, and mountain plant life.