Bugfolk, Insectoids or Bugmen are all collective and informal names of races of insect-based creatures common in fantasy and science fiction settings. They range from Thri-Keen from the AD&D setting Darksun, T'Rang from the Wizardry series to Klackon from the Master of Orion/Magic series. 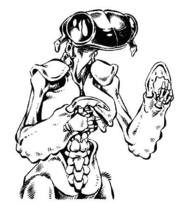 It's hard to define the generic Insectoid appearance, but it's well established that bugfolk retain most of their insect features - multiple limbs, wings, stings, feelers, compound eyes and chitinous carapace. Most Bugmen are organized in a social structure similar to a bee, termite or an ant hive - a caste system, ruled by a queen. Some of these societies exhibit a "hivemind" behavior - a sort of a collective consciousness, shared over different members of their species, while some of the Insectoids prefer a solitary life-stye akin to spiders or lone wasps. Whether the queen is the only one that can produce eggs or are all bugfolk are capable of doing that is usually setting-dependent.

Usually Bugfolk in a setting have their own unique name that they prefer to be referred as to. It can be sometimes unpronounceable to other races, causing other races to develop their own names or nicknames for them.

The most common 'bases' for bugmen are spiders, beetles, ants, wasps, mantises.

Please refer to the Sheek article

A whole race of insectoid creatures of unknown name, populating a city.